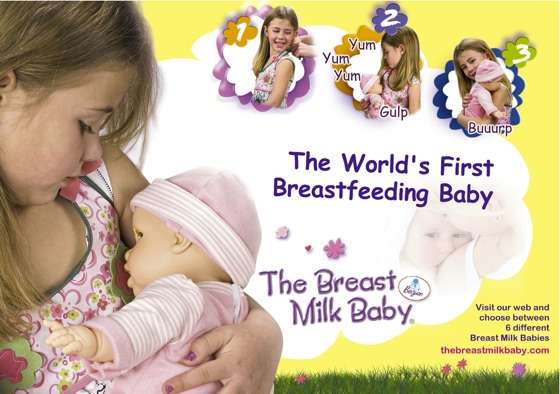 Jonathon Brown — November 11, 2012 — Life-Stages
References: thestar & digitaljournal
The Breast Milk Baby is causing a stir in the United States and being rejected by retailers, despite being named one of the most “socially responsible” products for children by Dr. Toy Top. The doll comes with a nipple-equipped halter that senses the doll’s proximity to the nipple and prompts it to start suckling. While supporters of the toy tout it as an educational experience and as a way for children to connect with their mothers, others are not so enthusiastic.

Notoriously conservative Fox News commentator Bill O’Reilly recently sounded off on the toy saying “I just want kids to be kids. And this kind of stuff, we don’t need this.”

The makers of Breast Milk Baby originally tried to achieve retail placement in the U.S. in 2011. Even after millions in European sales, the toy received resistance with some even calling it “creepy.”

“With retailers it’s been hard,” Dennis Lewis, the U.S. representative for Berjuan Toys told the Associated Press. “Not so much because they’ve been against the products. It’s more they’ve been very wary of the controversy.”

The doll comes in eight varieties featuring different skin tones and facial features. It retails for $89, but after the aforementioned resistance they toy is on sale for 50% off.
4.8
Score
Popularity
Activity
Freshness