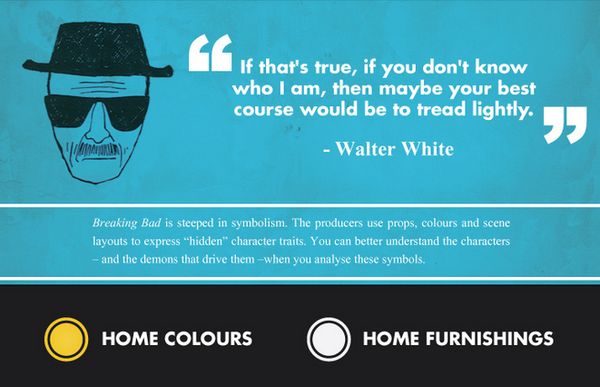 This Infographic Explains the Psychology of the Breaking Bad Home

One example is the use of red color in Walt and Skyler's house. The color, as some of us might know, represents both passion and untamed expression. This is something we often see in the relationship between Walter and his wife. All the furniture are different colors. The infographic explains this as a lack of conformity, "representing the disarray that bubbles just below their orderly appearance." Walter and Skyler both began with average, politically correct jobs, but as Walter got more into the meth chemistry and drug dealing, things began to look much more scandalous.

There is further analysis into the symbolism behind Breaking Bad and we are guided into several other locations like the homes of Jesse, Hank and Marie, Guys, Mike and others.

Though the observation and exploration of these symbols, more meaning is brought to the narrative. This increases the value of the show and helps us better understand the characters, props, color themes and settings.
3.8
Score
Popularity
Activity
Freshness
View Innovation Webinars