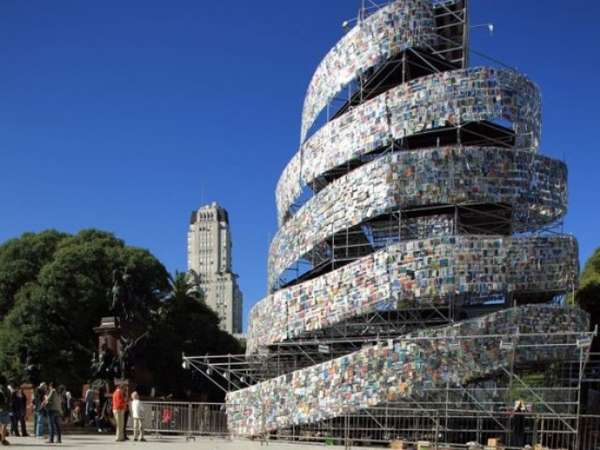 Michael Hines — May 13, 2011 — Social Good
References: esquina.pe & odditycentral
Bookworms looking to make a pilgrimage to celebrate the written word should consider heading over to Buenos Aires and checking out the Book Tower of Babel. Created by Argentine artist Marta Minujin the Book Tower of Babel was created to celebrate Buenos Aires being dubbed the World Book Capital of 2011 by UNESCO.

The Book Tower of Babel stands an imposing 82-feet and is made up of over 30,000 books each written in languages from around the world. The books come from all areas of literature and include manuals, novels, dictionaries and autobiographies. The books are arranged in six levels with the American books occupying the lower two levels: European books occupying the third and fourth levels, African books in the fifth level and Asian books in the sixth. The tower has already been dedicated and will be on display until May 28th.
1.6
Score
Popularity
Activity
Freshness