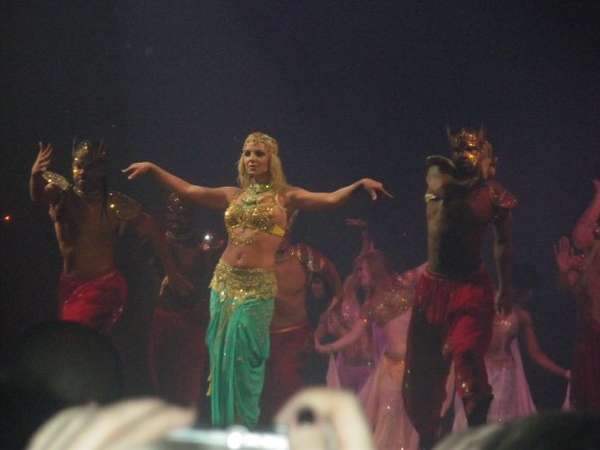 Even Britney Spears Infuses Her Concert With ‘Slumdog Millionaire' Mov

Rose Nazarali — March 24, 2009 — Celebs
References: popmusicscene
Ever since the release of the Oscar winning film, Slumdog Millionaire, the world has taken to everything Bollywood. From the colourful fashions to the upbeat music and ethnic dances, Bollywood is the new hot thing in the entertainment biz. Quickly following A. R. Rahman’s Oscar win of “Jai Ho,” the Pussycat Dolls, alongside Rahman, swiftly rerecorded an English version of the song and have released it as their new single. The music video features the Dolls wearing Indian-inspired clothing, with Bollywood-style dancing, paying homage to the original film’s dance sequence.

But PCD aren’t the only ones who have been inspired by this new trend. Britney Spears has remixed her hit song, “Me Against the Music,” with Indian back beats and performs it during her current tour, “The Circus.” Spears and her dancers are all clad in beaded, colourful, Indian clothing during this performance and the choreography looks like it is straight out of a hit Bollywood film.

My trend senses are telling me that there is going to be a lot of Indian inspired jewelery and clothing hitting the stores soon, along with a lot of sampling of Indian music on the radios.
1.2
Score
Popularity
Activity
Freshness

Razor-Thin Smartphone Grips
The Ohsnap Grip Works with Any Smartphone