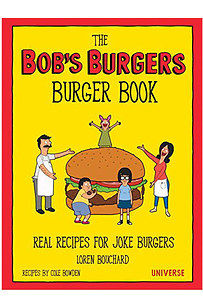 Alyson Wyers — August 14, 2015 — Business
References: thebobsburgerexperiment & buzzfeed
Share on Facebook Share on Twitter Share on LinkedIn Share on Pinterest
It was recently announced that a Bob's Burgers cookbook will be coming out next March. Inspired by the hilarious cartoon, the pun-tastic recipes are from the tribute blog The Bob's Burger Experiment. The book is also part of a collaboration between Bento Box Entertainment, Fox and the TV show's creator Loren Bouchard.

Currently the Bob's Burgers cookbook is in its early stages, but the official cover has been released. New burgers have also been released on the blog, which is run by Cole Bowden. This includes the Saffron Saff-roff Burger, which contains a turkey patty with green apple and onion, plus saffron-infused honey. Another example is the National Pass-Thyme Burger, which consists of salt, pepper and red paprika-seasoned turkey burger on a bed of mixed greens with red tomato, white thyme, mint and dill-flavored chevre spread topping.
3.5
Score
Popularity
Activity
Freshness
Get Trend Hunter Dashboard