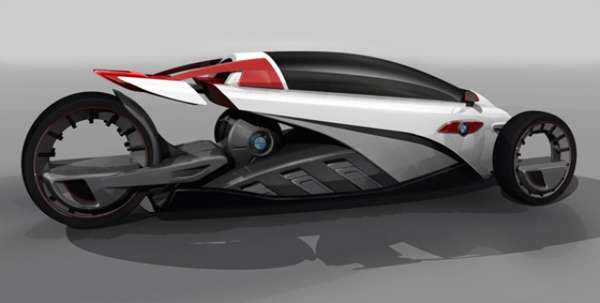 The BMW i1 Lets You Three-Wheel in Style

Michael Hines — July 28, 2011 — Autos
References: yankodesign
Share on Facebook Share on Twitter Share on LinkedIn Share on Pinterest
The BMW i1 is a concept tricycle designed by Amadou Ba Ndiaye that looks nothing like any car, bike or scooter currently made by the company. The BMW i1 is designed to be a safer alternative to a bike and funner alternative to a car, and is powered by three independent electric motors mounted in each wheel.

While the BMW i1 may not look like anything created by the German car company before, it does have the same look and feel as the Vision Efficient Dynamics, BMW's newest conceptual electric car that can be seen in the upcoming Mission Impossible 4. That car was deemed "crazy" and "ahead of its time" (at least by me), yet it is headed into production, albeit in the year 2013 and under a different name. While I am ready to crown the BMW i1 the new Vision Efficient Dynamics, I will say that anything is possible, including BMW making an all-electric single-seat tricycle.
6.5
Score
Popularity
Activity
Freshness
Access Advisory Services

Roofless Roadsters
The BMW 328 Hommage is Pure Style and History