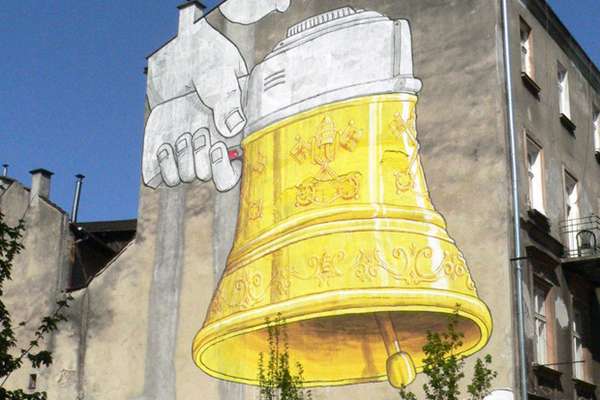 Blu Poland Mural of Divine Entity Speaking to the Masses

Jason Soy — May 12, 2011 — Art & Design
References: blublu.org & hypebeast
This Blu Poland mural really speaks to the masses. Italian street artist Blu painted the mural depicting a divine entity speaking through a megaphone to a congregation recently during his visit to Krakow, Poland.

Blu is known for his use of religious motifs and this wall mural continues that trend. Perhaps the most unique feature of this Blu Poland Mural is the image of the church bell, which has been transformed into a megaphone used by a god-like figure to communicate his message to hundreds of people. The expression on the people’s faces suggests that the message being spoken is ominous in nature, and the pale skin tones of the people and the divine entity may also be clues to the true meaning of this mural.

For those wondering how this amazing feat was accomplished, Blu painted this mural using a cherry lift and an industrial paint roller.
4.1
Score
Popularity
Activity
Freshness