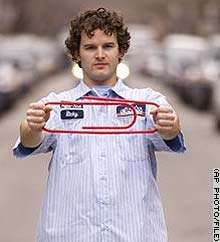 Kyle MacDonald, however, has pulled it off.

One year ago, the 26-year-old blogger from Montreal set out to barter one red paper clip for something and that thing for something else, over and over again until he had a house.

On Wednesday the quest is ending as envisioned: MacDonald is due to become the proud owner of a three-bedroom, 1,100-square-foot home provided by the town of Kipling, Saskatchewan. MacDonald and his girlfriend, Dominique Dupuis, expect to move there in early September.
3.4
Score
Popularity
Activity
Freshness
View Innovation Webinars

11 Paperclip Creations
From Bookmarks in Distress to Giant Paperclip Seating