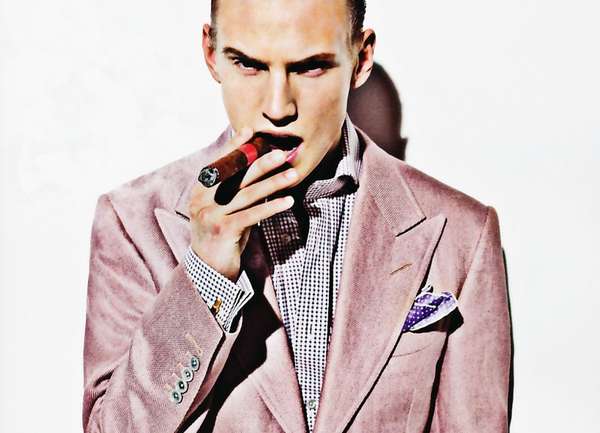 Marissa Brassfield — May 3, 2010 — Fashion
References: tomford & thefashionisto
Model Alexander Johansson channels a young Hugh Hefner for 'Blazing Sun' in Sense magazine, posing in semiformal fashions while brandishing a cigar. My favorite look from this editorial is the one in which Johansson is wearing a rose-colored blazer.

'Blazing Sun' in Sense was photographed by Junji Hata, and stylist Tomoki Sukezane curated the menswear featured, all of which comes from the Tom Ford Spring 2010 collection.

Implications - Pink was once considered a very feminine color, but more and more it is being integrated into more masculine features. Similarly, masculine blazers are also coming in to fashion for women. Products that borrow from elements that are associated with the opposite sex appear refreshing.
4.4
Score
Popularity
Activity
Freshness