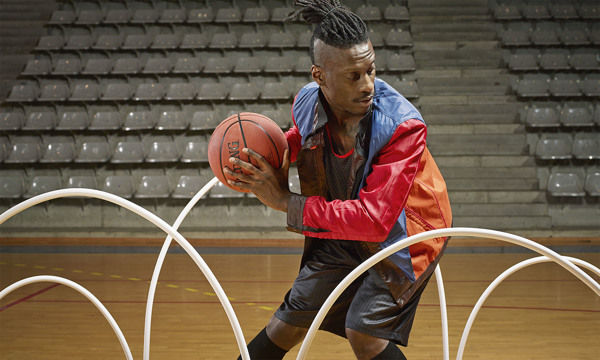 Meghan Young — April 24, 2014 — Fashion
References: bkrw & behance.net
Share on Facebook Share on Twitter Share on LinkedIn Share on Pinterest
The BKRW Magazine April 2014 editorial is a timely photoshoot considering that the NBA playoffs is in full swing. Inspired by the sport of basketball, it revolves around some serious ball handling skills, which is highlighted by the presence of a rather surreal prop: sculptural lines that indicate where the ball has bounced.

Shot by Jean Yves Lemoigne, a photographer based in Paris, New York, the BKRW Magazine April 2014 editorial showcases a range of sporty attire that are fit for not only the gym, but also out in the world as well. Full of swagger, the outfits were styled by Alexandre Miséricordia and Aurélien Storny. From layered jackets to baggy shorts and long tank tops, the looks bring style to the sport. It was art directed by Julien Gosset.
4.4
Score
Popularity
Activity
Freshness
Attend Future Festival