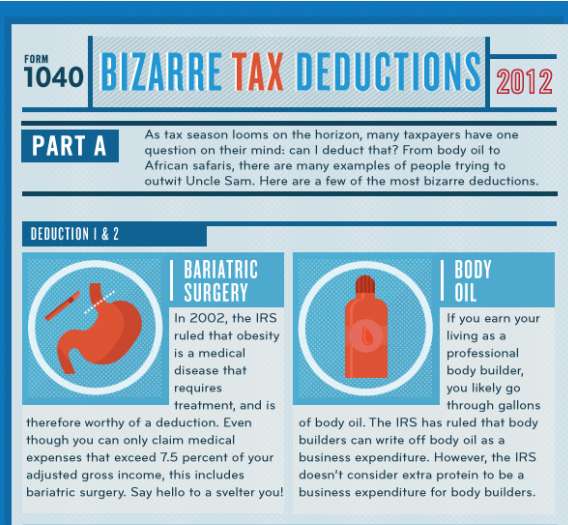 Sarah Moore — March 23, 2012 — Pop Culture
References: columnfivemedia & holykaw.alltop
In light of it being the time of year when the government makes its citizens fill out time-consuming and tedious paperwork about their finances, the 'Bizarre Tax Deductions' infographic gives a few pointers on how to keep as much money away from the powers-that-be as possible.

Commissioned by Column Five Media for Turbo Tax, the series lists 12 of the most ridiculous deductions that can legally be claimed on income tax forms.

Interestingly enough, there is a deduction for "deadbeat debts," which is great news for anyone that has ever lent someone ridiculous sums of money that have never been repaid. Crazy cat ladies can also rejoice at being able to write off their kitty kibbles, and body builders no longer have to worry about how much money they're spending on body oils because that can get written off too.

The Bizarre Tax Deductions infographic also mentions that any business trip taken in Bermuda can be written off which will entice tax payers to splurge on a trip there on the government's dime.