Sound Systems for Bicycles
Next
Set of
Related
Ideas 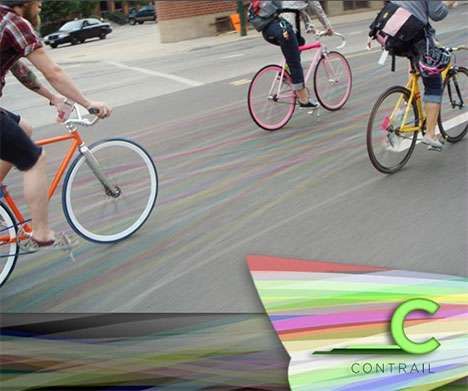 Have you ever noticed when you're on a slightly muddy trail that it's the footprints and bike tire treads on the ground that are its most distinctive trait? You can see how many others took this very same route. It's interesting to think that with the next rainfall, the ground's most prominent trait will be washed away, the canvas washed clean, ready to be marked by the next set of travelers.

But what about on the road? Bike Contrails are created by constantly releasing powdered chalk on the tire surface, allowing the colored chalk to create freshly lined trail on any flat surface, such as on streets.

"The goal is to encourage a new cycle of biking participation by allowing the biking community to leave a unique mark on the road and to reclaim this crucial shared space," Studio Gelardi says, adding that "contrail lines get brighter as community grows."