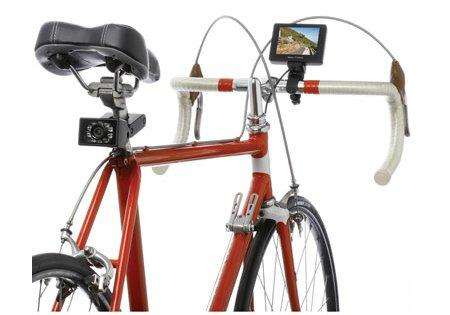 Meghan Young — June 29, 2012 — Lifestyle
References: hammacher & ohgizmo
When it comes to increasing cycling safety, almost anything goes and the Bicycle Rearview Camera is one example of that. In place of side mirrors that easily distort the surrounding areas behind the cyclist, this device provides as accurate a view as can be so that riders know exactly what is going on behind them. Considering that many drivers often neglect the fact that they share the road with cyclists, the Bicycle Rearview Camera can help to significantly reduce avoidable accidents while increasing the cyclists' safety.

Available on Hammacher Schlemmer, the Bicycle Rearview Camera comes in two parts. The camera fixes to the seat post while the color monitor is mounted on the handlebars. Weather- and vibration-resistent, it sports red LEDs that flash when the camera's built-in sensor detects low-light conditions for visibility to traffic.
3.2
Score
Popularity
Activity
Freshness