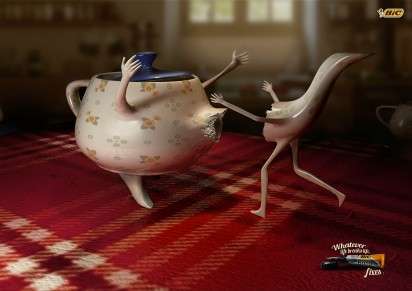 The BIC Bond Campaign Shows That Whatever Breaks Up is Fixable

Meghan Young — June 13, 2012 — Marketing
References: facebook & ibelieveinadv
Share on Facebook Share on Twitter Share on LinkedIn Share on Pinterest
The BIC Bond campaign adorably personifies everyday objects. Instead of following in Ikea's well-trodden footsteps, this ad campaign doesn't focus on the sad state of thrown out products but focuses on fixing broken ones. Likening the shattering of a button and teapot to a separated human couple, the BIC Bond campaign shows that "whatever life breaks up, Bic Bond fixes."

Conceived and executed by BorghiErh / Lowe, a talented ad agency based in Sao Paulo, Brazil, the BIC Bond campaign may seem impossibly surreal, but people will get a kick out of the imaginative images. Art directed and illustrated by Roberto Ulhoa with creative direction by Fernando Nobre, the campaign was captured by photographer Denis Sitta and copywritten by Ricardo Scarpa.
5.2
Score
Popularity
Activity
Freshness
Get the 2021 Trend Report FREE