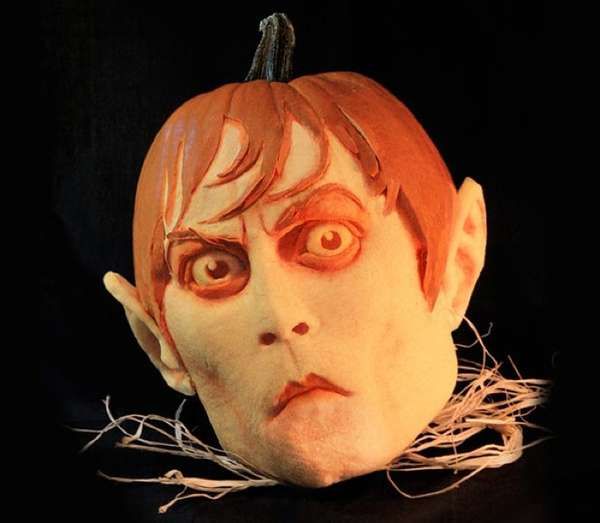 The Barnabas Collins Pumpkin Has an Uncanny Johnny Depp Resemblance

Meghan Young — October 19, 2012 — Art & Design
References: villafanestudios & mymodernmet
Share on Facebook Share on Twitter Share on LinkedIn Share on Pinterest
Ray Villafane of Villafane Studios has once again wowed the world with his Barnabas Collins Pumpkin. Inspired by the eccentric 'Dark Shadows' character, the studio has immortalized the retro vampire in a ghoulishly gourd way. Of course, a vampire would theoretically survive significantly longer than this vegetable. That is, if vampires existed at all.

Looking just like actor Johnny Depp in the movie, the Barnabas Collins Pumpkin has his signature expression down pat. As though perpetually scandalized by something, the pumpkin carving sports wide eyes, a tilted head and tightened lips. Considering that the Villafane Studios is known for their mastery of expressions in this medium, it should come as no surprise that they were able to nail an uncanny resemblance to this character. It was created for Warner Brothers.
5.2
Score
Popularity
Activity
Freshness
Jeremy Gutsche Keynote Speaker