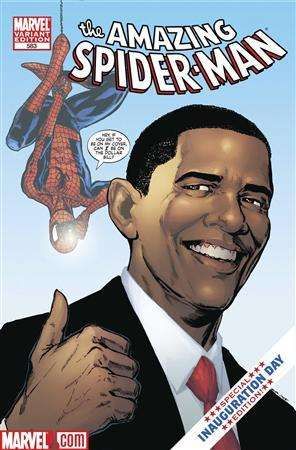 Marvel Comics is issuing a special inauguration month issue, "The Amazing Spider-Man" #583, featuring a cartoonified Obama on the cover. The issue itself includes an Obama thriller in which Spider-Man prevents a bad guy from taking his place as president.

When this hits stands on Jan. 14, be sure to pick it up; this is sure to become a collector’s gem!

(The gallery also includes The Clintons in Superman: The Man of Steel, Ronald Reagan in 'Batman: The Dark Knight Returns,' Jimmy Carter on the cover of 'Superman vs. Muhammad Ali,' Richard Nixon in 'Watchmen,' John F. Kennedy in Action Comics and Richard Nixon in From Beyond the Unknown.
3.3
Score
Popularity
Activity
Freshness
Attend Future Festival