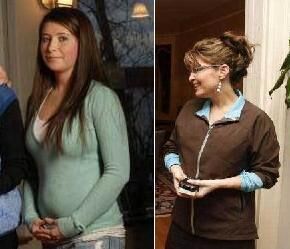 Did Sarah Palin Fake Pregnancy for her Teen Daughter?

Pearl — September 1, 2008 — Life-Stages
References: dailykos
Share on Facebook Share on Twitter Share on LinkedIn Share on Pinterest
For Sarah Palin, John Cain’s newly appointed Vice Presidential running mate, the media scrutiny is only just beginning. Daily Kos.com recently came out with a long and intriguing post (with follow-up) with supportive evidence to suggest that Palin is not the mother of her last child, Trig Paxson Van Palin, but the grandmother. Trig’s mother, according the article, is Bristol, her 16-year-old daughter.

Throughout her pregnancy, which was announced late at seven months, Sarah Palin did not look pregnant at all given this is supposedly her fifth child. Observers were amazed at her trim figure. The photos shown here are dated when she was allegedly heavily pregnant.

When amniotic fluid started to leak a full month before the due date whilst in Dallas, Sarah Palin did not check into the nearest hospital but delivered her keynote speech as expected and flew back to Alaska. This is not normal behaviour for birth is imminent when amniotic fluid leaks. The last thing to do is take a long flight. No one apparently noticed Palin was in labour on the flight back either. The baby was delivered in a small hospital rather than in a larger facility in Anchorage especially for a premature infant.

Reporters also discovered that Palin’s daughter, Bristol, took a leave of absence from Anchorage High School for several months. The reason given was she had infectious mononucleosis. Closer observation of family photos dated in late 2007 show Bristol with a tell-tale bulge.

The baby was diagnosed with Down’s Syndrome. Although the risks of carrying such infants are higher in women Palin’s age (43) (if they get pregnant at all), more Down’s Syndrome babies are actually born to the under 35 group because these women are not usually tested. Was the fact that Sarah Palin was a supposed mother of a Down’s Syndrome baby and a pro-lifer, one of the reasons McCain chose her?

The last few photos show Bristol taking care of little Trig. If this story is true, then it seems a shame that a mother cannot claim her own son publicly. This is an intriguing and unfolding story.

The story twists continue. Reuters followed up with a story of their own this morning, confirming that Sarah Palin’s daughter, Bristol Palin, is actually pregnant right now.
6.4
Score
Popularity
Activity
Freshness
Get Better and Faster