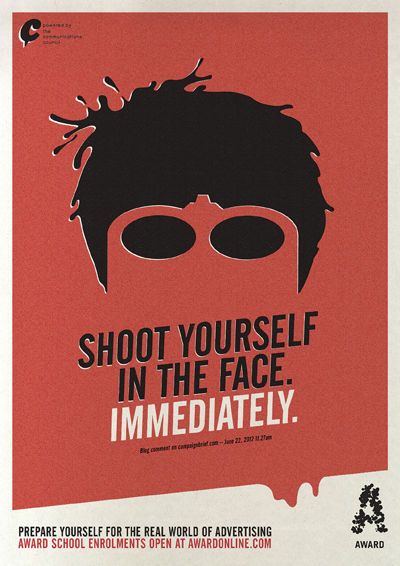 Meghan Young — March 12, 2014 — Marketing
References: saatchi & adeevee
Share on Facebook Share on Twitter Share on LinkedIn Share on Pinterest
The Award Advertising School ad campaign reads, "Prepare yourself for the real world of advertising," and follows up that statement with brutally honest quotes that would get anyone's blood boiling. From "I want to stab myself in the eyes" to "What geniuses racked their brains and sh*t this out?," the posters help to steel newbies for a world of hurt, at least in their chosen industry.

Conceived and executed by Saatchi & Saatchi, Sydney, Australia, the Award Advertising School ad campaign was art directed by Jade Manning with creative direction by Damon Stapleton. According to the creators, "We sourced headlines from real comments on advertising blog sites to prepare students for the realities of the advertising industry." Students will need to grow some thick skin.
5
Score
Popularity
Activity
Freshness
View Innovation Webinars