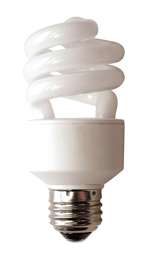 jagedge26 — April 12, 2007 — Eco
References: cflbulbs & news.bbc
How much energy do you want to save? If you're an Aussie, quite a bit it would seem. In late February, Australian Environment Minister Malcom Turnbull announced that energy-wasting incandescent bulbs would be banned throughout the country and replaced by other technologies by 2011. What will they be replacing them with? The current go-to technology is the Compact Fluorescent Light (CFL) bulb. According to cflbulbs.com, the average CFL bulb "uses 66-75% less electricity to produce the same amount of light as a comparable incandescent bulb", which translates into serious cost savings for consumers and serious energy conservation and pollution reduction for the planet. Other features bringing people onto the CFL bandwagon include the fact that they last 6-10 times longer than the average light bulb, and produce almost no heat, as compared with the 75-90% inefficiency of standard bulbs.

Of course, nothing's perfect, including CFL bulbs, and several people are going out of their way to point out problems with CFL bulbs - namely: 1) It costs more up front to purchase CFL bulbs (though the cost is more than made up in energy savings), 2) poor quality CFLs can take time to warm up and cannot be dimmed(good quality, electronically-regulated ones do not have these issues), 3) they contain small amounts of mercury (recycling them negates this point, and even if they do make it to a landfill, the trace amount of mercury that could leach into the ground is far less than the amount of mercury released into the atmosphere by a coal-fueled power plant in order to keep a single Incandescent light bulb lit over it's lifespan), 4) they do not cast as "warm" a quality of light as incandescent bulbs (absolutely and unfortunately true).

An even better choice than CFL bulbs may eventually reside in LED lighting. Unfortunately, the technology is still too expensive for most residential applications. Since the announcement was made, other locations around the world are considering jumping on the bandwagon.
3.9
Score
Popularity
Activity
Freshness