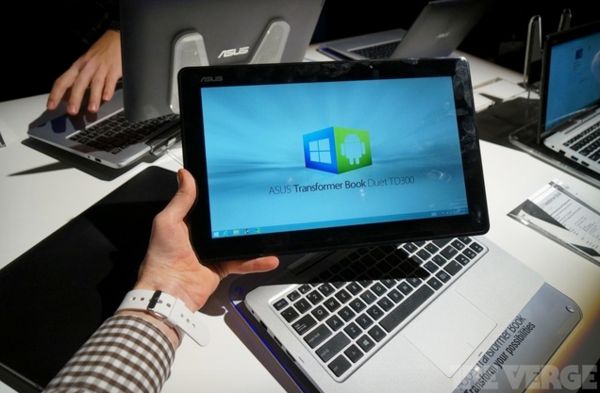 Angela Rajic — January 8, 2014 — Tech
References: asus & reviews.cnet
Share on Facebook Share on Twitter Share on LinkedIn Share on Pinterest
The Asus Transformer Book Duet, revealed at the 2014 CES convention, will not only be able to convert from tablet to laptop, but it will also be able to switch between Android and Windows with a simple push of the Instant Switch button on the laptop or virtual key on the tablet.

As the world's first quad mode computer, the Asus features an Intel Core i7 processor with 1600 RAM, 128 GB of storage and a 64 GB Micro SD card. Intel HD graphics will be shown on a 13.3 inch 1920x10180 HD screen. The Asus Transformer Book Duet features WiFi, Bluetooth comparability and a dock with USB drives, along with an HD camera. The Asus is twice as fast as existing tablets that are powered with ARM processors and its Windows to Android capabilities make it a great evolutionary step in tablet technology.
2.1
Score
Popularity
Activity
Freshness
Get Better and Faster