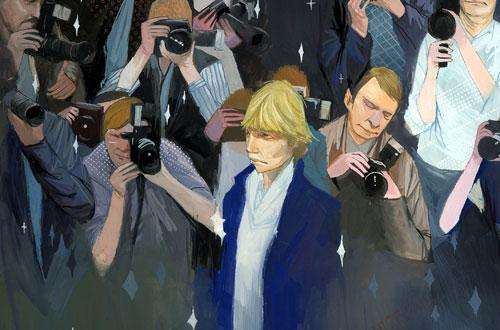 Jordan Sowunmi — July 21, 2011 — World
References: andrewhem & booooooom
Share on Facebook Share on Twitter Share on LinkedIn Share on Pinterest
Camobodian born, Los-Angeles based artist Andrew Hem has led a life tempered with turmoil. He was born at the height of the Khmer Rouge genocide and escaped with his family to Los Angeles, where he moved into the harsh realities of the American inner city.

As an artist, Andrew Hem was strongly influenced by the graffiti that marked the walls, storefronts and sidewalks of his neighborhood. The influence led to him spending much of his childhood on the streets creating his own street art. After high school, Hem attended the Art Center of College Design where he focused on illustration.

Looking through his portfolio, it's clear that as an artist, Andrew Hem is blending typically incongruent artistic styles together in an effort to establish his own aesthetic. The hallmarks of graffiti, subtle sociopolitical commentary, and figure drawing are evident in Andrew Hem's art. My favorite illustration from his collection seems to take place on an average day in an Asian country that is very likely his native Cambodia. The hustle and bustle of the relatively downtrodden nation is broken up with a Nike sign, prominently displayed above a traditional street shop. This lowkey commentary on the effects of globalization is a potent one coming from an artist whose artwork is so clearly influenced by his native country, despite the fact that he has lived in another one for the majority of his life.

Implications - In the last few years, graffiti has moved from a shunned subculture to a celebrated and burgeoning genre of the art world. A company can show its commitment to artistic expression and harness the power of viral marketing by investing in a partnership with an accomplished graffiti artist. The graffiti artist would create vital street art that would serve as a form of guerilla marketing, as well as draw support from other graffiti artists and street art fans.
3.5
Score
Popularity
Activity
Freshness
Get Better and Faster