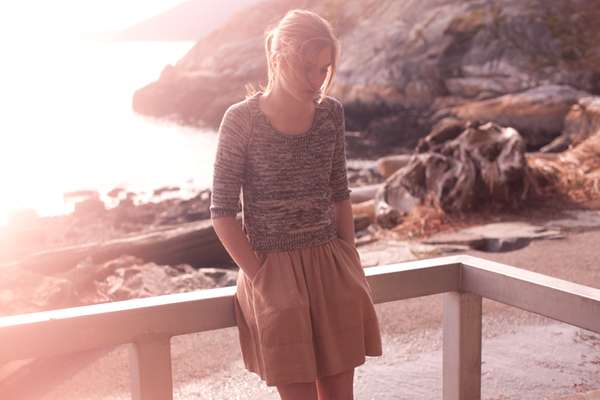 Jordy E — April 8, 2012 — Pop Culture
References: aritzia & fashionotes
The Aritizia x Wilfred Spring 2012 collection has remained true to the brand's elegant roots. Often straying away from the daring or eccentric, the fashion house has been recognized for its production of classic and often timeless pieces. Easily jazzed up or down, the wares have been go-to's for both American and Canadian women, and have also received considerable endorsements from celebrities around the globe.

As is expected, the Wilfred Spring 2012 display is tasteful, and is currently being exhibited via a solemn lakeside photo shoot. These Wilfred images are discernibly wistful. The model featured sports a concerned look, and casts her gaze downwards for the most part. The emotional feel of the shoot does not detract from the exquisite apparel choices, however. Via the showcasing of bright billowing fabric and expertly-tailored blazers, the brand's dedicated clientele base will likely flock to the Aritzia stores this season.