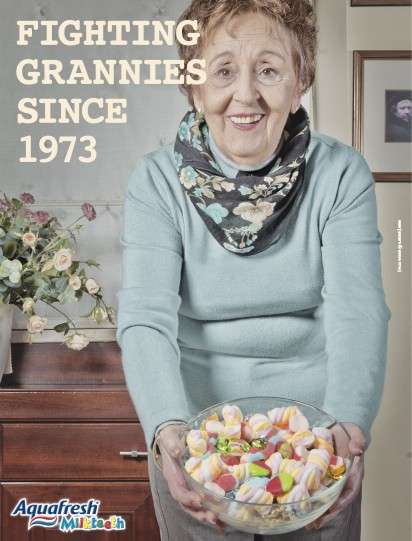 Meghan Young — January 12, 2012 — Marketing
References: facebook & ibelieveinadv
As much as grandmother's want the best for their grand children, the Aquafresh Milk Teeth campaign shows that more often than not, they are encouraging bad habits and unhealthy lifestyles. They have mastered the art of spoiling so well that children disregard some of their fundamental lessons to the dismay of their parents.

According to the Aquafresh Milk Teeth campaign, however, this toothpaste and toothbrush company has been "fighting grannies since 1973." It has taken a hard stance against indulging children's sweet tooth by way of products that have been designed specially for young mouths.

The Aquafresh Milk Teeth campaign was conceived and created by Adler Chomsky, an ad agency based in Grey Tel Aviv, Israel. It was art directed by Yosi Even Kama and photographed by Yaron Izhakov with copy by Uri Shoham.
2.1
Score
Popularity
Activity
Freshness