Top 40 Home Trends in May

Top 95 Eco Trends in May
Next
Set of
Related
Ideas 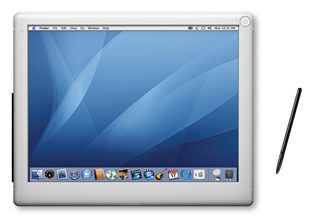 Bianca — November 6, 2007 — Unique
References: blogs.pcworld
Rumors have been swirling that Apple could be producing a touch-screen tablet computer, combining the direct screen interaction of the iPhone with the functions of a MacBook.

PC World pictured, "Apple trying to fill the gaping hole in its existing notebook lineup by releasing an ultraportable computer, one with Apple design influences and a touchscreen."

The debate between Macs and PCs has been going on for decades, many professionals preferring the technological components, particularly graphic quality, that Apple provides, but thrown off by its large size. The creation of a smaller, more portable MacBook would be an obvious winner for people across all occupational fields.
4.4
Score
Popularity
Activity
Freshness

40 Tablet Technologies
From iPads to Kindles, Tablets are Must-Haves

24 Rad iConcepts
Since the iPad is Now a Reality, Will Any of These Designs Be Next?