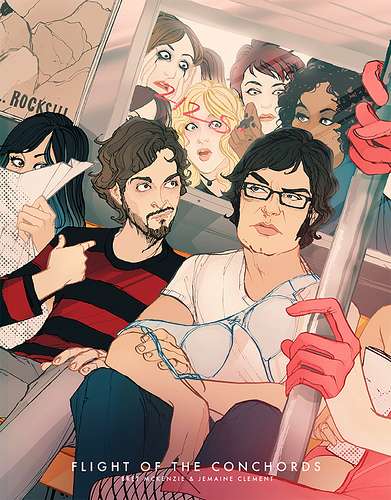 Annie Wu Draws Some of the Most Beloved Small Screen Characters

Jason Soy — November 16, 2011 — Pop Culture
References: anniewuart & anniewu.tumblr
Share on Facebook Share on Twitter Share on LinkedIn Share on Pinterest
If all fan art were as amazingly executed as these Annie Wu creations, professional animators everywhere would be in some serious trouble. Capturing the physical likeness of the most beloved TV characters from Flight of the Conchords, Parks and Recreation and the The Venture Bros., Wu's drawings are both pleasing to fans of awesome shows and real artistry. I mean, if you can stare at her picture of Andrew Garfield as Spider-Man and not be impressed, you damn well better have a great reason.

But don't let Annie Wu's choice of illustrating TV-related subjects fool you into thinking she needs to piggyback off small screen successes to garner her own attention. Her work has already appeared in publications such as Vertigo, DC Comics, ELLE Magazine, Lacrosse Magazine and, if you have a keen enough eye, on Cartoon Network's Adult Swim programming block.
5.2
Score
Popularity
Activity
Freshness
Attend Future Festival