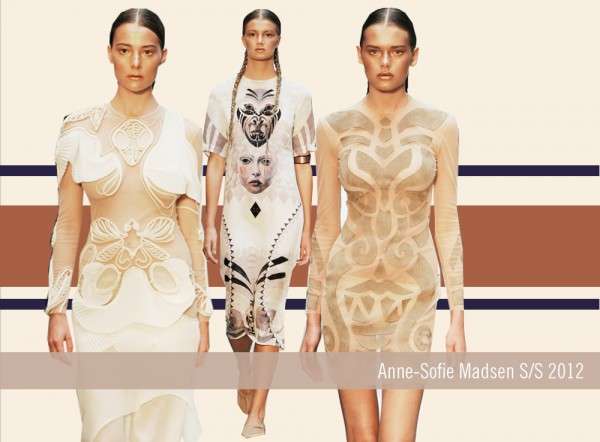 Corinne Guirgis — August 13, 2011 — Fashion
References: annesofiemadsen.dk & trendland.net
The wildly different Anne-Sofie Madsen SS 2012 collection just debuted at Copenhagen Fashion Week to rave reviews. The bold patterns and overarching nude color schemes are fresh, fun and fashionable. Madsen's experience in the fashion world has driven her collection to be both runway- and street-ready, as she has previously worked for John Galliano and as a junior designer at Alexander McQueen.

The way the collection threads together tells a unified fashion story and has excited me for the end-of-season flair that crosses over between summer and fall. Some of the prints are almost tattoolike in nature, screaming tribal chic with the multilayered textures that run through the line. Though Madsen's career as a headlining designer has just begun, her SS 2012 collection shows promise for her emerging design career.

Implications - Emerging fashion designers that have trained and practiced under veterans get help in creating well-rounded collections that appeal to a wide variety of consumers and buyers eager to feature fresh innovation in their stores.
5.3
Score
Popularity
Activity
Freshness