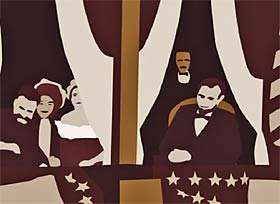 Bianca — November 5, 2007 — Art & Design
References: signonsandiego
Share on Facebook Share on Twitter Share on LinkedIn Share on Pinterest
The evolution of the digital age has also encompassed the art world, causing new art forms to arise, including hybridization or fusion of old and new media. Visual art is seeing the convergence of illustration and painting with digital animation and film technologies, a contemporary artistic medium referred to as "animated painting."

"Ezawa, who is American, and Murata, who is from Japan, represent the disparate nature of these filmic works," Sign On San Diego wrote. "Ezawa's combines imagery of the Lincoln and Kennedy assassinations, using a digital process that allows him to draw by hand over film footage. Meanwhile, he pays homage to the spirit of Milan Kundera's most widely read novel, which also provides the title of his one-minute film shown on an old-school projector, 'The Unbearable Lightness of Being.'"

"Murata eases from image to abstraction and back again, several times. Rambo is recognizable and then fades into a swirl of colors. The dot in his title surfaces like a synthetic sun and flashes like a strobe light. His approach is closer to painting."

The artists come from across the world. Lislegaard is from Copenhagen, Pimkanchanapong from Bangkok and Kentridge is from South Africa.

Lislegaard's imagery is closer to that of video games, but overlaid with a painter's sensibility. Her film points to one tendency in the show: adapting computer-or media-generated imagery to an individual vision. This is an opposite tendency, as Hertz points out, to the artists like Kentridge and Qiu, who begin with drawings and construct a film from then.

Like virtually all shows that chronicle a trend, this one assembles artists of contrasting styles and sensibilities. That's to be expected in a time when art itself is so eclectic.

There's even one artist, Wit Pimkanchanapong from Bangkok, whose major contribution to the exhibition is a ceiling canopy that flows across the entire space for the show. It consists of sheets that mirror the imagery in a short computer-animation piece airing in the galleries. Call it filmic decoration or set design.
3.6
Score
Popularity
Activity
Freshness
View Innovation Webinars