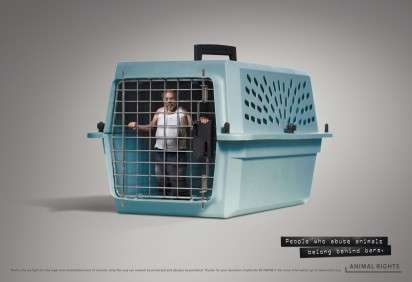 The Animal Rights Campaign Fights for the Social Betterment of Animals

Meghan Young — February 8, 2013 — Marketing
References: ruflanz.ch & ibelieveinadv
Share on Facebook Share on Twitter Share on LinkedIn Share on Pinterest
The Animal Rights campaign cleverly illustrates the tag line, "People who abuse animals belong behind bars." But instead of putting these perpetrators behind the bars of a human jail cell, they are shown inside typical animal cages for cats, birds and hamsters. This gives a different perspective to such pet staples. If a person feels trap in these cages, how do animals feel? Of course, the Animal Rights campaign isn't necessarily referring to this as a form of abuse.

Created by Ruf Lanz Werbeagentur, an ad agency based in Zurich, Switzerland, the Animal Rights campaign hopes to gain donations to fight for the legal and social betterment of animals. It was art directed by Isabelle Hauser.
3.3
Score
Popularity
Activity
Freshness
Attend Future Festival