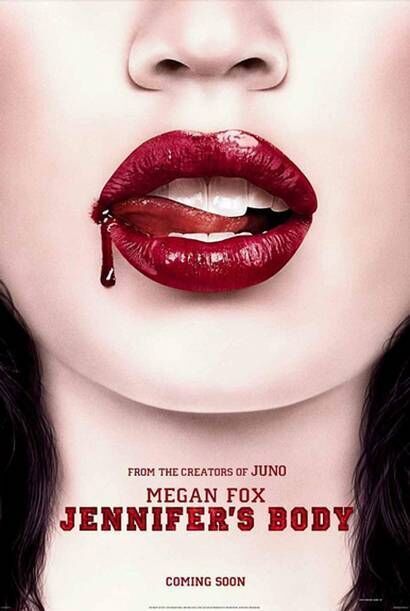 mediterranean — July 24, 2008 — Pop Culture
References: firstshowing.net
Share on Facebook Share on Twitter Share on LinkedIn Share on Pinterest
The first poster for the upcoming thriller Jennifer's Body starring Megan Fox looked eerily familiar. After some research, it turned out that the deja vu inspiration is an Angelina Jolie photo that shows Jolie seductively licking the blood off her lip.

Megan Fox's blood red luscious lips are the focus of the Jennifer's Body movie poster. The dripping blood is a nod to Fox's character, Jennifer, a newly possessed cheerleader who kills her male classmates. The film is written by Juno's Oscar winning screenwriter Diablo Cody.

But the media's fascination with blood does not stop there. The promo poster for HBO's new vampire series, True Blood, has just been unveiled. It also draws a striking resemblance to the older Jolie photo. True Blood is by the creators of the HBO cult favorite Six Feet Under. It starts on September 7.

Check out the 6th image for Anna Paquin (from X-Men), who plays Sookie Stackhouse, a mind reader in True Blood.

Check out some recent stories about Jolie and Fox: