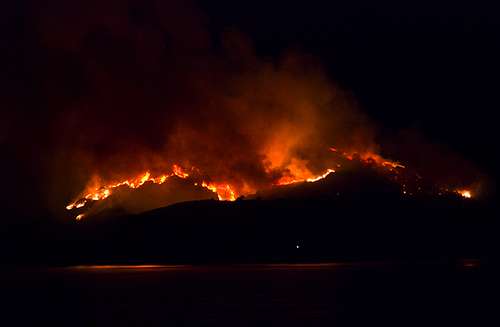 As you can tell from these images, the Angel Island fire, which started on Sunday evening, grew so strong that it could be seen for miles around the San Francisco Bay area.

In fact, SF Chronicle writes that the Angel Island fire could be seen by residents in "San Francisco, Marin, Contra Costa and Alameda counties - from the hills in San Francisco, Berkeley, Oakland and El Cerrito to the shorelines along Richmond, Tiburon, Sausalito and San Francisco".

"We are seeing a silhouette of the island in flames," said Jacqueline McCrath, who was watching the fire from Telegraph Hill in San Francisco. "It's been spreading really fast - we saw a vigorous blaze at the top of the hill at first, and now it has spread across a lot of the island. It appeared very suddenly - the first thing we saw was a blazing hilltop."