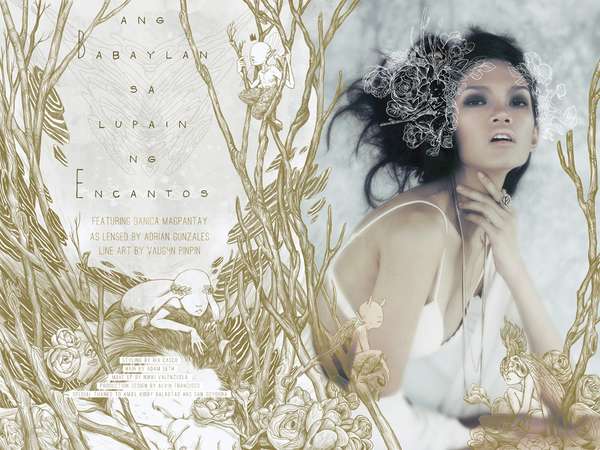 Ang Babaylan sa Lupain ng Encantos, which translates to "The Prophetess within the Lands of the Enchanted," is a fashion editorial that highlights concepts based on Filipino folklore. Gonzales' lens captured Magpantay's ethereal and soft beauty, which is a contrast to her usual hardcore "fierce" image mostly found in magazine editorials, while Pinpin carefully embroidered the photos' blank spaces with mythical creatures such as nymphs and fairies to complete the overall look that has now been achieved by the feature.

The set is a celebration of limitless possibilities. It demonstrates how one doesn't have to resort to stereotypes in order to produce work that is at risk of being considered inspired by a Western influence. Magpantay's dark skin deviates from usual cherub figures found in paintings, and her modeling skills prove that evoking "angelicness" can be done without the association from pre-notions that angel figures have to have light skin, and so on. To add is Pinpin's line art which, while inspired by Narnian elements, should not be confused with what's Filipino. The overall picture, when looked at altogether, produces a feeling that is unmistakeably Filipino.
5.6
Score
Popularity
Activity
Freshness
Access Advisory Services