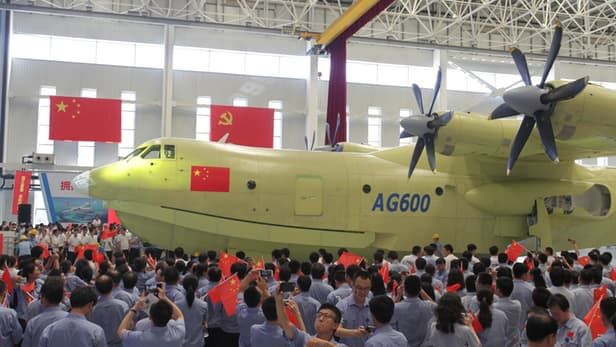 The AG600 is the World's Largest Amphibious Plane

Rahul Kalvapalle — July 27, 2016 — Autos
References: news.xinhuanet & gizmag
The AG600 is a spectacularly massive amphibious aircraft, designed and launched recently by China's national aircraft maker, that is designed to be be able to control and douse forest fires and rescue people stuck in dangerous situations.

This amphibious aircraft measures 37 meters in length and boasts a wingspan of 38.8 meters, making it roughly around the size of a Boeing 737. Unlike the Boeing 737 however, the AG600 is capable of taking off from and landing on both ground and water. It is capable of carrying a payload of up to 59 tons and is capable of cruising at a top speed of 500 km/h.

This gargantuan aircraft is a massive breakthrough for China's aviation industry, and demonstrates the country's seriousness in the area of aeronautical engineering.
6.1
Score
Popularity
Activity
Freshness