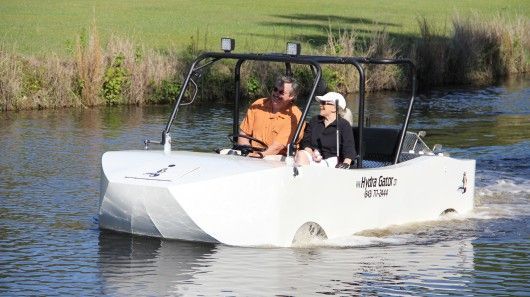 The Hydra-Gator Can Be Used on Pretty Much Any Terrain

The vehicle has a hybrid drive train with a three-cylinder 953 cc diesel engine powering its all-wheel-drive system. A pair of 75 pound thrust electric marine motors power the water propulsion system that kicks in when the Hydra Gator enters the water.

This amphibious vehicle has a flexible configuration, with customers able to specify the amount of battery storage they require and the size of the fuel tank. The default setting includes enough battery packs to allow the vehicle to run for 30 to 45 minutes on electric mode; however, there's enough space to include batteries that will keep the Hydra Gator going for three hours.

The vehicle's six-gallon diesel tank can be enlarged to hold more than 30 gallons of fuel, offering greater range on land.

This incredible amphibious vehicle is incredibly inexpensive given its features, and will sell for $60,000. It is not street-legal in the US, but that doesn't matter seeing as how it can go just about anywhere else.