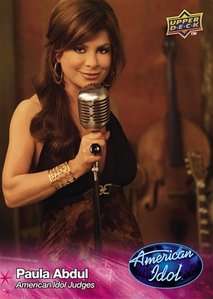 "American Idol" Stars to be Cast in Cardboard

Card publisher Upper Deck, known for its sports collectibles, is teaming with FremantleMedia, the producers of "American Idol," to create the 138 card series, set to launch April 21, 2009.

“With the trading cards, it’s an old school way of interacting with the fans. It’s another form of expression for the fans to demonstrate their connection with the show and collect their favorites,” says Nora Wong, senior manager of consumer products at FremantleMedia.

The “American Idol” trading cards will be sold in packs of five and there will be 6 exclusive autographed cards randomly distributed amongst the bundles.
1.2
Score
Popularity
Activity
Freshness
Access Advisory Services

Be A Star At Disney World
American Idol Sound Stage