Naked For A Cause 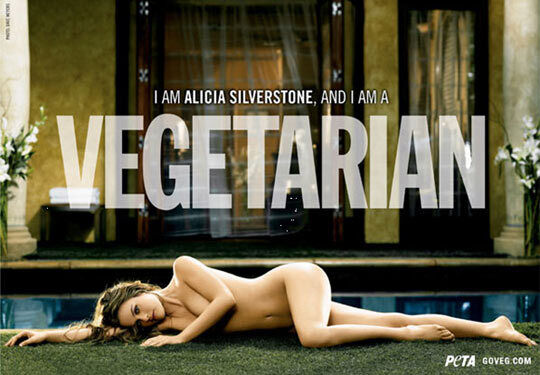 Alicia Silverstone Strips Down For PETA

Bianca — September 20, 2007 — Naughty
References: peta.org & energy.de
Share on Facebook Share on Twitter Share on LinkedIn Share on Pinterest
Actress Alicia Silverstone stripped down to her birthday suit for PETA's latest campaign. PETA, or People for the Ethical Treatment of Animals, is an organization against animal cruelty. The new campaign features an image of the actress laying on the ground naked and the headline, "I am Alicia Silverstone, and I am a VEGETARIAN."

The star who made her claim to fame as Cher in Clueless has joined other celebrities like Pamela Anderson in standing up for her beliefs. Silverstone, who you might also remember as Batwoman, has only been a vegetarian for ten years, but has always loved animals. On PETA's website, Silverstone says that if you ever have the chance to see a cow, pig, turkey of goat, you will realize that these animals are just as cute and sweet as dogs and cats, and that just like your pets, these animals deserve to live and be loved.

She says becoming a vegetarian was the most important decision she has ever made. Physically, the effects were amazing she said. Once she cut meat out of her diet, she lost weight, her finger nails become stronger, and her hair had new luster. She says she feels amazing now and feels more beautiful than she did 11 years ago.

And by the looks of these photos, she could be right!

PETA has featured nude celebrity campaigns before, with stars stating they would rather go naked than wear fur.

Nudity is a sure fire way to get attention, and many activists have realized it's a good way to make a statement. Trend Hunter recently featured an article about activists getting naked for global warming: