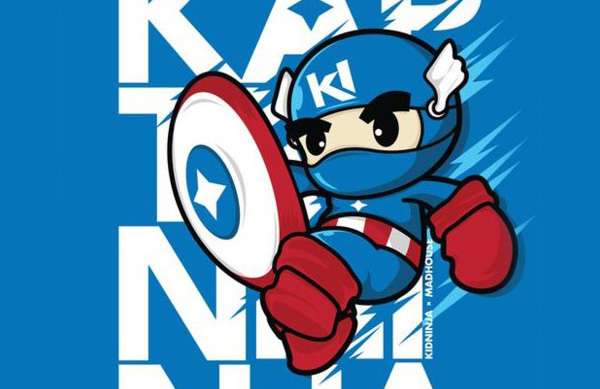 Jason Soy — February 23, 2012 — Pop Culture
References: thekidninja.tumblr & blog.thaeger
Share on Facebook Share on Twitter Share on LinkedIn Share on Pinterest
Growing up, every boy wanted to be either a ninja or a superhero, but AJ Salazar demonstrates that you don’t have to choose between the two with his rad illustrations of ninjafied superheroes. In addition to their superpowers, Captain America, Thor and Iron Man now have the added advantage of stealth assassin skills. There’s simply too much awesomeness in these cartoons!

AJ Salazar drew these cute creations as part of his KIDNINJA lifestyle brand, which fuses urban street culture with geeky interests and Japanese anime-influenced artistry. The Philippines-based graphic designer has given a similar illustrative treatment to basketball players, rappers, UFC fighters and even the guys from Epic Meal Time.

If you feel you’re severely lacking in ninja-related content as of late, be sure to check out everything KIDNINJA has to offer.
5.2
Score
Popularity
Activity
Freshness
Get the 2021 Trend Report FREE