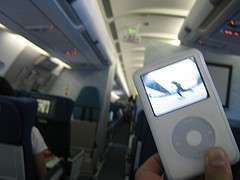 Mazen — November 14, 2006 — Tech
References: apple
Share on Facebook Share on Twitter Share on LinkedIn Share on Pinterest
"Apple Today announced it is teaming up with Air France, Continental, Delta, Emirates, KLM and United to deliver the first seamless integration between iPod® and in-flight entertainment systems. These six airlines will begin offering their passengers iPod seat connections which power and charge their iPods during flight and allow the video content on their iPods to be viewed on the their seat back displays."

The interesting part is that I posted an article on my blog about this deal between Apple and some airlines way back in April. Now since I enjoy listening to my iPod on long flights, I guess this would be a great feature, looking forward to try this out.