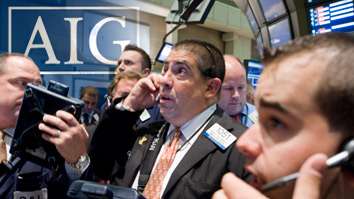 AIG Bailout “The Most Radical Intervention” in History

Lehman Brothers, Bank of America, American Internatioal Group.... these are names that will belong to the pages of the history we’re currently in the middle of, unfolding as we lead our daily lives.

There couldn’t be more pressure on the presidential candidates either. While the government is trying their darnedest to prevent a global financial crisis, their multi-billion dollar AIG insurance agency bailout doesn’t ensure the American empire won’t fall.

“The decision, only two weeks after the Treasury took over the federally chartered mortgage finance companies Fannie Mae and Freddie Mac, is the most radical intervention in private business in the central bank’s history,” the NYTimes.com says.

It’s a terrifying time, and while we’re in the middle of watching history unfold, there’s not much we can do but wait, and continue to follow stories like those about AIG, Lehman Brothers and the Bank of America.
2.4
Score
Popularity
Activity
Freshness
Access Advisory Services