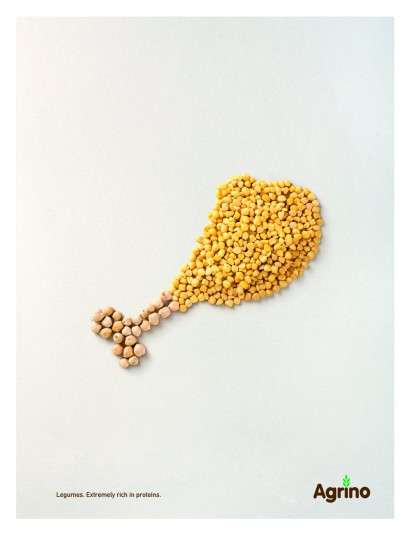 The Agrino Campaign Shows That Legumes are Packed With Protein

Meghan Young — March 14, 2012 — Marketing
References: ddb & ibelieveinadv
Share on Facebook Share on Twitter Share on LinkedIn Share on Pinterest
For those who don't know, the Agrino campaign imparts the important knowledge that legumes are "extremely rich in proteins." Not everyone is aware of the many benefits that vegetables have, in particular beans, so the Agrino campaign has taken it upon itself to show both visually and textually that this food group can easily be used as a supplement for harder-to-digest, meatier meals.

Conceived and executed by DDB, an ad agency based in Athens, Greece, the Agrino campaign is comprised of two print ads with images of legumes such as corn and chickpeas that have been formed into meat shapes like a pork chop and drum stick. The Agrino campaign was art directed by Anabella Klironomou with photography by Kostis Papatheodorou.
2.4
Score
Popularity
Activity
Freshness
Jeremy Gutsche Keynote Speaker