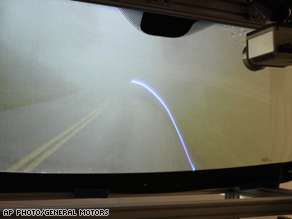 Going Like Sixty — July 21, 2008 — Autos
References: edition.cnn
Here's your scary thought for the day: in the next two decades, the number of people over 65 years old will have doubled. Worse, because these 71.5 million people can still afford gas, they will be on your highways. Let's hope General Motors gets their new laser enhanced windshield perfected soon.

Adding infrared sensors and a camera, the GM cars will look at the road ahead and project a clue on the windshield as to what might be ahead. It's not a prescription lens windshield, but it can help a driver's vision by making objects larger than they appear. Watch for the adult entertainment industry to pick up on this quickly.

"For example, during a foggy drive, a laser projects a blue line onto the windshield that follows the edge of the road," CNN explains. "Or if infrared sensors detect a person or animal in the driver's path during a night drive, its outline is projected on the windshield to highlight its location.

"It's possible because of a transparent coating on the windshield that lights up when struck by ultraviolet light."

Here's another innovation for aging boomers: