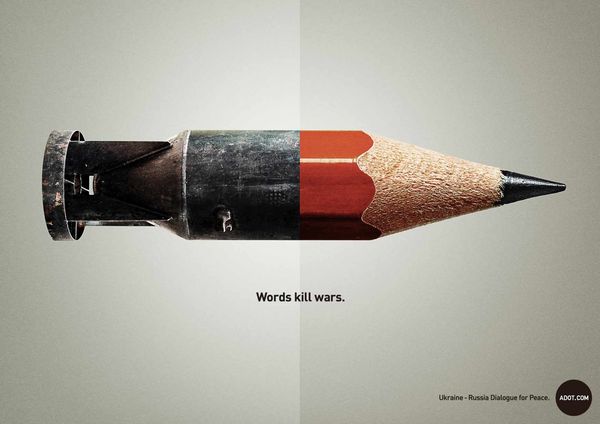 Meghan Young — April 18, 2014 — Marketing
References: adot & fubiz.net
Share on Facebook Share on Twitter Share on LinkedIn Share on Pinterest
There is a saying that goes, 'The pen is mightier than the sword,' and the Adot Words Kill War ad campaign focuses on the meaning behind it. Bombs, guns and grenades might lay landscapes and people to waste, but speech has an even more powerful affect. It can stop the explosions and avert the bullets. This message is compelling depicted through the juxtaposition of two different choice of weapons--one violent, the other peaceful.

Conceived and executed by the Ogilvy & Mather ad agency branch based in Japan, the Adot Words Kill War ad campaign is specifically addressing the conflicts between Ukraine and Russia. Adot writes, "At the end of the day – if all people stand up and refuse to fight their neighbours, and if all these people grab a megaphone and shout it from the rooftops, there will be nobody left to hold the gun."
5.6
Score
Popularity
Activity
Freshness
Access Advisory Services