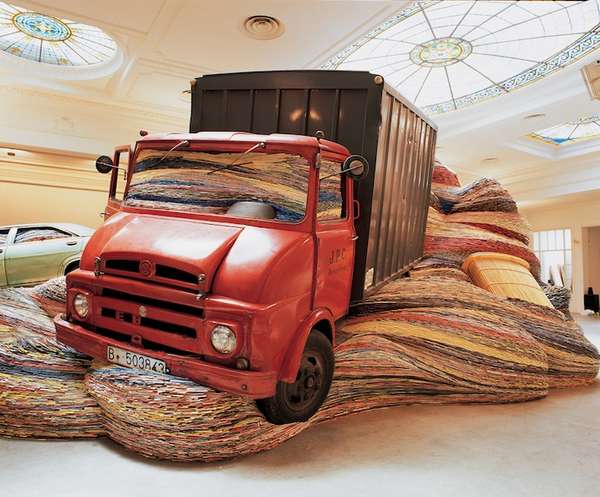 Adding Fuel to the Fire by David Mach is Massively Mountainous

Meghan Young — August 27, 2012 — Art & Design
References: davidmach & mymodernmet
Share on Facebook Share on Twitter Share on LinkedIn Share on Pinterest
Magazines appear to be making a comeback in a terrifying way, at least in the Adding Fuel to the Fire art installation. Coming together to form massive waves, they consume everything that is in their path, from trucks and cars to pianos and couches. This mountainous installation has been expertly sculpted to relay a sense of urgency and movement to its audience.

Envisioned by Scottish sculptor David Mach, the Adding Fuel to the Fire art installation immediately builds a connection with its viewers due to the use of familiar objects, whether they are displayed in a familiar manner or not. As stated on his website, "Mach’s practice subverts traditional meanings assigned to objects and reassigns them surreal or anarchic connotations, often surprising the viewer through scale, materiality or concept and prompting the viewer to reconsider their preconceptions."
3.5
Score
Popularity
Activity
Freshness
Attend Future Festival Virtual