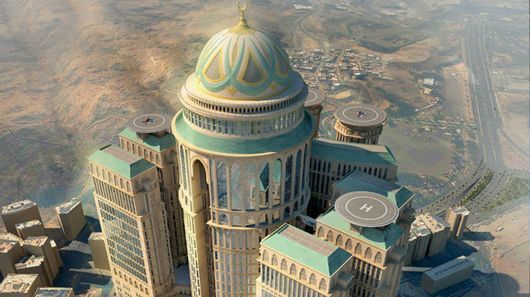 Rahul Kalvapalle — June 2, 2015 — World
References: dar.dargroup & gizmag
Share on Facebook Share on Twitter Share on LinkedIn Share on Pinterest
Abraj Kudai is a five-star hotel -- the world's largest -- that is being slated for construction in the Muslim holy city of Mecca in Saudi Arabia. This hotel will boast 10,000 bedrooms and 70 restaurants in its 45 stories, with five floors being given over for the exclusive use of the Saudi royal family.

The hotel will include large commercial and retail spaces, a shopping mall and a bus station, making it more than just a place for people to lay their heads. The site will be accessible by several major roads.

The fact of the matter is that while tourist destinations rise and fall in popularity, this is not the case for religious cities that the faithful are required by religious instruction to make an effort to visit. This makes Mecca a lucrative location for the hotel industry. And while Abraj Kudai sounds like an expensive project, it is sure to reap the benefits once it opens its doors in 2017.

Icy Nordic Hotels
The 25th Iteration of Icehotel is Built Out Of Nearly 5,000 Tons of Ice