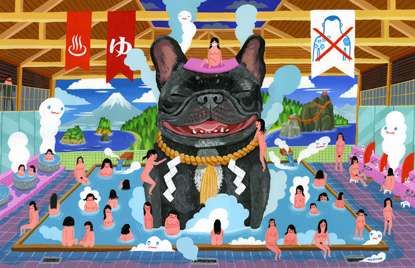 Jason Soy — March 14, 2012 — Art & Design
References: aaronmeshon & brwnpaperbag
Share on Facebook Share on Twitter Share on LinkedIn Share on Pinterest
It doesn’t get any more bizarre than these Aaron Meshon illustrations. With building-sized pugs sitting in a pool surrounded by humans, gigantic rabbits riding ferries and pictures of humans twice the height of local stores, it’s as though Meshon doesn’t let reality get in the way of producing a good image.

Aaron Meshon is a popular artist whose work has been featured in Newsweek, Rolling Stone, Chronicle Books, Entertainment Weekly and more. It seems everyone can’t help but gravitate towards his whimsical, vibrantly colored images. His illustrations are so imaginative, in fact, that viewers simply want to reach into his creations and physically play with his work as if it were a toy. Meshon’s ability to invoke a child-like attitude amongst audiences is what ultimately makes his paintings so potent.
4
Score
Popularity
Activity
Freshness
View Innovation Webinars