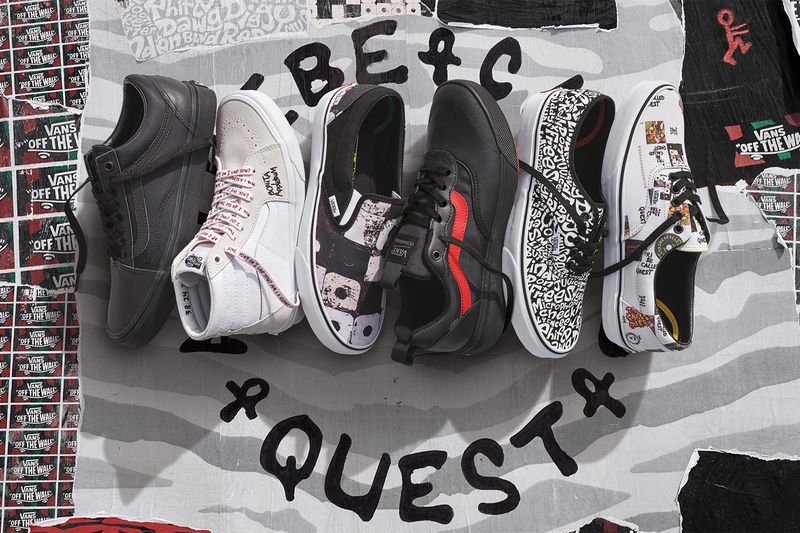 Amy Duong — March 28, 2018 — Fashion
References: vans & highsnobiety
Share on Facebook Share on Twitter Share on LinkedIn Share on Pinterest
Footwear label Vans is celebrating American hip-hop trio A Tribe Called Quest with its newest range of sneakers. The label honors the music group's large role in music and pop culture development with the series of sneakers that recall A Tribe Called Quest's iconic song lyrics and album artwork. The capsule is comprised of reworked silhouettes including the Slip-Ons, the Old Skools, Sk8-Hi, the Ultrarange and the Era.

The Slip-Ons recall the group's 2016 album 'We Got It From Here...Thank You 4 Your Service.' The Era takes on an all-over decorative design of album covers from 1990 to 2016. While the Old Skool silhouette references the artwork from 'The Anthrology,' the Sk8-Hi wears lyrics from the song 'Bonita Applebum.' The Era silhouette celebrates the life of Philfe Dawg, and lastly, the UltraRange is crafted in black leather with red side straps.

The collaborative range will be dropping on April 6th, but will also be available briefly at the House of Vans Brooklyn at the end of March.
6
Score
Popularity
Activity
Freshness
View Innovation Webinars