A Game Within a Game 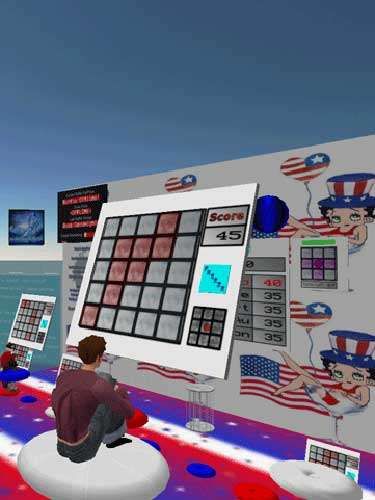 Cool Hunter — May 23, 2006 — Tech
References: wired
Share on Facebook Share on Twitter Share on LinkedIn Share on Pinterest
The story begins with Second Life, the online multiplayer world where players use a simple scripting language to create virtual items -- buildings, clothes, vehicles, toys. In Second Life, you get enormous street cred for being creative and figuring out new ways to socialize. So in December 2004, one of the players -- an Australian whose screen name is "Kermitt Quirk" -- got an idea: Why not create a video game that's playable inside Second Life?

He started programming, and pretty soon he'd created Tringo -- an intriguing fusion of bingo and Tetris. As with Tetris, you have to take an oncoming stream of oddly shaped blocks and fit them together so they disappear. The difference is that in Tringo, you lay down the bricks one by one on a bingo-like grid, and amass points when you make larger masses of bricks vanish. Quirk designed Tringo as a group game: Second Life players would show up at someone's house, sit in a floating Tringo chair with a Tringo card in front of them, and compete to see who could get the biggest score.

In essence, Quirk had created one of gaming's most hallowed properties: A "casual" game that can be learned in a few minutes, but never entirely mastered. "The concept is so simple," Quirk said in March, "that people can pick it up real quick and be winning after even only two or three games." Tringo also cleverly updates the intricacy of Tetris: Whereas Tetris had five different shapes of bricks, Tringo has nine, allowing for ever-more-subtle playing strategies. (Wired Magazine)