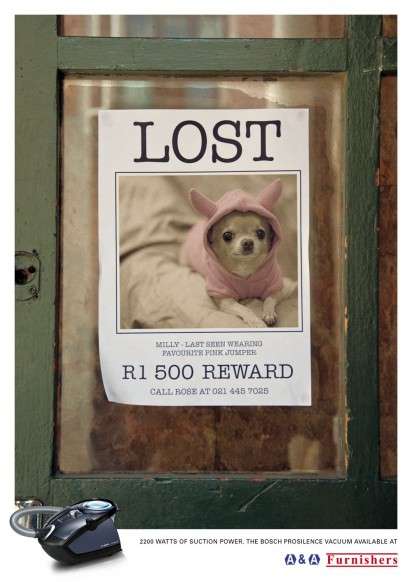 Meghan Young — April 23, 2012 — Marketing
References: canvaslifestyle.co.za & ibelieveinadv
Share on Facebook Share on Twitter Share on LinkedIn Share on Pinterest
The A&A Furnishers campaign promotes some very powerful Bosch vacuums including the brand's Wet & Dry Vacuum and Allrounder Vacuum Cleaner. They are so powerful, that they not only suck up dirt and dust, but also tiny dogs as well. At least, that is what the ad campaign alludes to with the classic missing dog posters it centers on.

Conceived and executed by Canvas Lifestyle, an ad agency based in Cape Town, South Africa, the A&A Furnishers campaign may depict a very unlikely situation, but the hilarious exaggeration of Bosch vacuum cleaner capabilities will stand out to potential customers, especially if those customers happen to own a teacup pet or two.

The A&A Furnishers campaign was art directed by Brinke van Zyl with creative direction by Michael Ipp and photography by Graham Bartholomew.
5.4
Score
Popularity
Activity
Freshness
Get Better and Faster