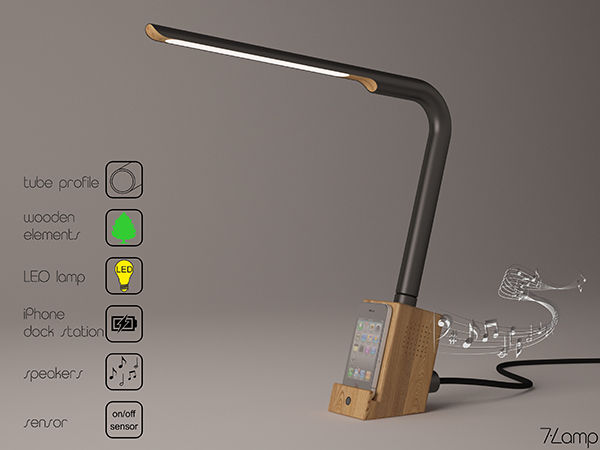 The 7lamp by Volodymyr Karalyus is Shaped Like an Acute Angle

Meghan Young — November 18, 2013 — Art & Design
References: behance.net & yankodesign
Share on Facebook Share on Twitter Share on LinkedIn Share on Pinterest
Taking on the form of the number it is named after, the 7lamp by Volodymyr Karalyus, a furniture, industrial and product designer based in Lviv, Ukraine, is a handy table light that many will want to have on hand. Not only is it extremely practical with its adjustable feature, it could easily represent luck and life in many cultures around the world, just as the number seven does.

Made out of metal and wood, 7lamp by Volodymyr boasts two parts: a tube with embedded LEDs and a block base. The based doubles as a dock for the iPhone and has integrated speakers so that it can play music and other audio clips when resting in it. It is also equipped with an on/off sensor.
1.7
Score
Popularity
Activity
Freshness
Get Trend Hunter Dashboard