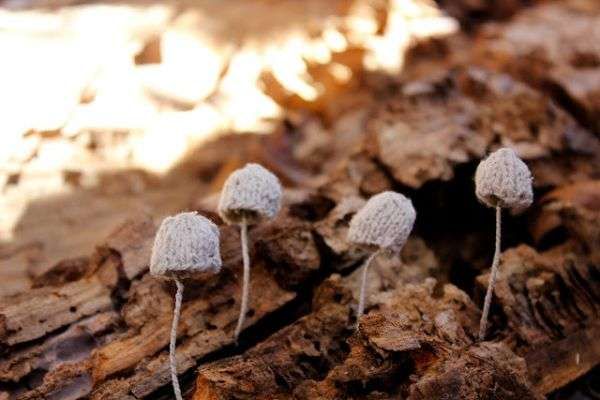 Meghan Young — March 26, 2013 — Art & Design
References: bromeleighad.blogspot & neatorama
Share on Facebook Share on Twitter Share on LinkedIn Share on Pinterest
Artist Leigh Martin has combined her obsession with fungi and love of knitting in the 52 Forms of Fungi project. She will essentially be knitting 52 different fungi over the year, which breaks down neatly into a fungus per week. Although the fungi are clearly crocheted creations due to their texture, they are impressively realistic, especially when placed in the real world.

With a few clarifying guidelines including naming the various forms and sticking to local species, the 52 Forms of Fungi project may also include fictional interpretations. Since Martin will be using fun yarn choices, she writes, "It's highly unlikely that metallic, silver fungi exists anywhere in nature other than maybe Rivendell." Since people are attracted to all things magical and whimsical, her audience probably won't mind.
1.8
Score
Popularity
Activity
Freshness
Get Trend Hunter Dashboard