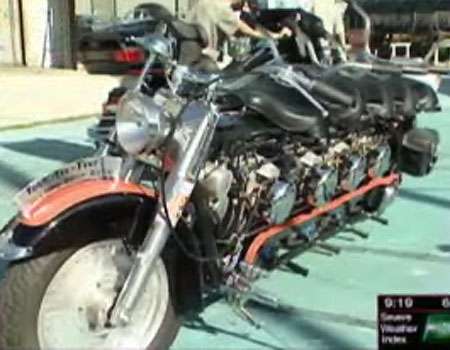 IdeaMan — August 31, 2008 — Autos
References: myfoxnewisconsin & foxnews
Share on Facebook Share on Twitter Share on LinkedIn Share on Pinterest
What’s the best way to say Happy Anniversary? Why, build a family-sized motorcycle of course! Well, sort of.
According to Fox News, Steve “Doc” Hopkins of Shawano, Wisconsin built the bike not for his anniversary, but for Harley-Davidson’s 105th. It took Hopkins, the owner of a Harley dealership in Bonduel, only 17 days to construct the hog using four 1950s flathead engines, spare Harley parts, metal tubing and a beer keg.

Now that takes some true innovation. I’m not sure exactly how you come up with an idea like this, but you have to admit, it certainly will turn heads!

(Check out the video here
2.8
Score
Popularity
Activity
Freshness
Get Better and Faster